Chris Macdonald is a challenger and a very inspirational rider. One of his biggest accomplishment was to Stand Up Paddled Mallorca to Ibiza over 50 miles to raise money for surf therapy in Peru. Read the interview below to know more about his story and how BOOTH training has helped him through his journey.

1 – How long have you been paddling for prior to your crossing?

I have been involved in a range of paddlesports such as kayaking for the last 12 years or so but been stand up paddling  for 6 years.

I paddled the English Channel 4 years ago and just thought it was time for another open water endurance challenge that was longer. After talking to various support boat companies I decided on Mallorca to Ibiza which is 55 miles. Open water crossings between islands and/or countries have always been my biggest attraction when it comes to challenging myself. It’s hard to explain why, I just find it really cool being that far out to sea with barely anything around you and knowing that you paddling to another island in this case.

I have crossed the English Channel twice, once in a kayak and once on a SUP. That crossing is 28 miles.

4 – How did you prepare for it? Both physically and mentally?

Being involved in lots of adventure sports from snowboarding, climbing and  paddlesports to name a few I’ve always had a good base fitness level. I started training specifically for this around March so 5 months before the crossing. The first 2 months I was still working full time but the last 3 months I was able to train full time in Mallorca so that helped. Best thing with physical training in mix it up especially when training every day. Mix up distances, intensity levels and even types of activities occasionally. As long as it’s structured and effective for your goal getting time on the water is the best form of training. Saying that  Mallorca is arguably the best place in the world to cycle so I got a road bike and cycled loads as part of my training too.

Mentally my strategy is to be confident that you can complete it. As soon as you doubt yourself your going to start struggling. Even little things like when I was explaining my challenge I never used the word attempt. I would always say I will be paddling Mallorca to Ibiza. As long as you manage this confidence and take training seriously your putting yourself in a good place. Being on a training plan and having structure definitely helps with motivation too. During the crossing I felt confident throughout even though I did have one dib in energy levels just over half way. A strong mindset is as important as the physical aspect so one stroke at a time I got there.

I was really impressed. When I was living in the UK full time one of the biggest challenges I face is getting on the water. I don’t live within walking distance of a body of water and I can’t drive. He did a great job planning other sessions when I could only paddle once or twice a week. In Mallorca I lived by the sea so that wasn’t a problem. The way the program is delivered through Final Surge is super user friendly and automatically syncs with fitness apps. I’ve been on training plans before when it’s just over complicated and doesn’t sync so it’s harder to see what you planned vs completed. Despite being in Australia Michael was always super quick to reply to questions and messages from me so I pretty much always got a reply before my next session which was great.

6 – What equipment did you use and how did you plan to cross safely?

I used a 14×29 iSUP by Loco Surfing. I had to use a iSUP because of the complications of not being able to drive around Mallorca and also it’s a lot easier to fly out with! Similar with the paddle, I used a 3 piece Carbon paddle which was surprisingly good. During the crossing I wore sailing trainers, I found this saved my feet from becoming sore and numb  and fingerless gloves to save my hands from potential blisters over 15 hours. This was definitely a good call as I had no problems regarding feet and hands. I wore board shorts and more importantly a long sleeve white rash vest to help, it most scenarios it actually keeps you cooler than short sleeved gear.

I had a support boat which I was able to charter for a few days to give me the chance to wait for good conditions. It was a company that runs cover for SUP crossings of the Gibraltar Strait but that specific crossing is a bit short for me. (Around 13 miles).

7 – How did the crossing go? Did it go as you expected?

I think the size of the swell took me by surprise but as time went on I started to use it to my advantage since it was mostly in the right direction. The wind forecast was bang on so no surprises there, the Mediterranean is actually quite predictable most of the time. Time wise, I did it in 15hrs with a average speed of 5.9km/h which is what I predicted. I stopped for a few minutes to eat and drink every 2 hours for the first 8 and then every hour from then. The support crew threw me snacks and bottles, it made for amusing moments as I was tiring towards the end. Overall I’m very happy with how it went, I put a lot of preparation and hard work into this so was definitely over the moon having done it successfully.

8 – Do you have any plans now to do more crossings like this?

No immediate plans but I love pushing myself and open water crossings. It would be cool to get back into kayaking so my next challenge might be in a kayak, guess we’ll just have to see but I don’t want to stop here. Definitely done with inflatables though, I think it was pushing it this time!

9 – What is your next goal for your paddling? Any races or events on the horizon?

I haven’t got much experience racing so would be cool to get into the race scene. I have my eyes on the Nautic SUP race in Paris in December so hopefully that will go ahead and I’ll be able to travel there from the UK.

I would like to thank Michael for the awesome training, I’ve got a lot of respect for you mate juggling your own competition and helping athletes all over the world. 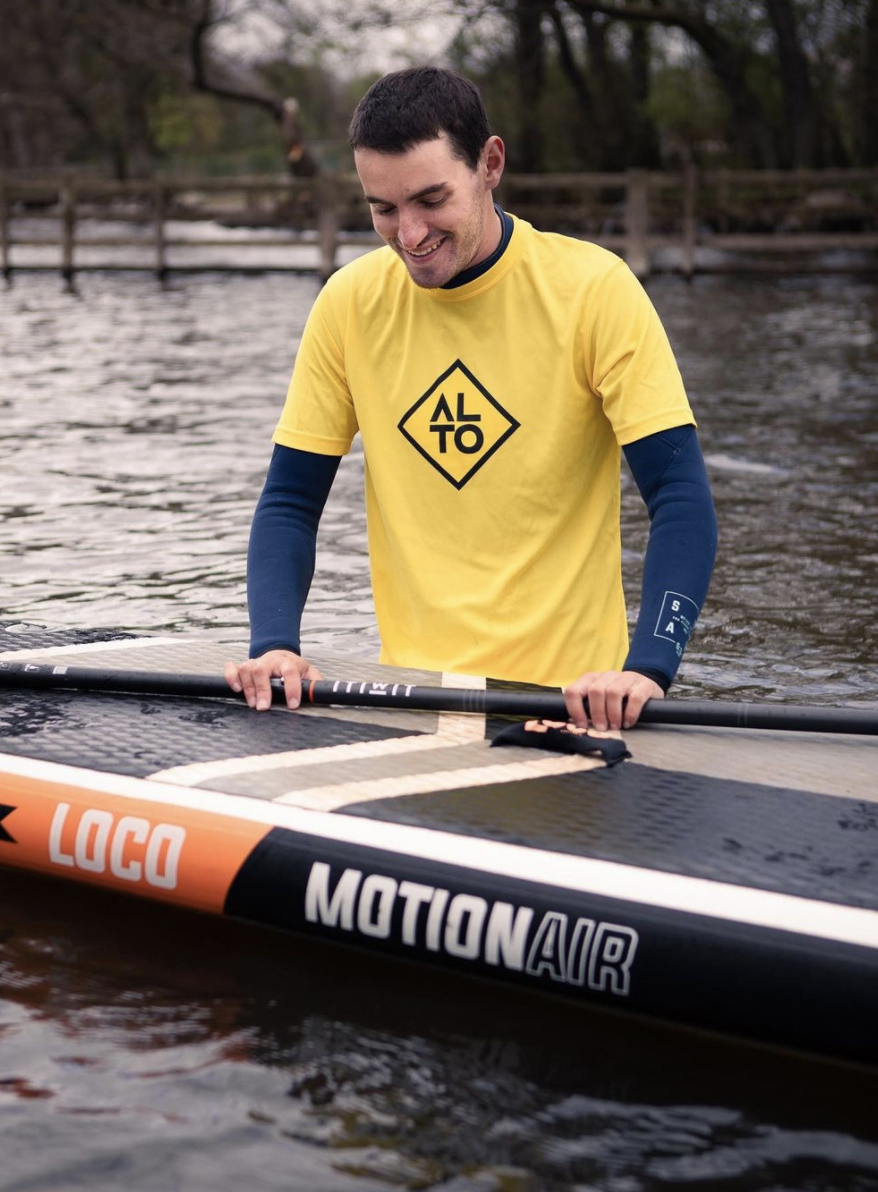