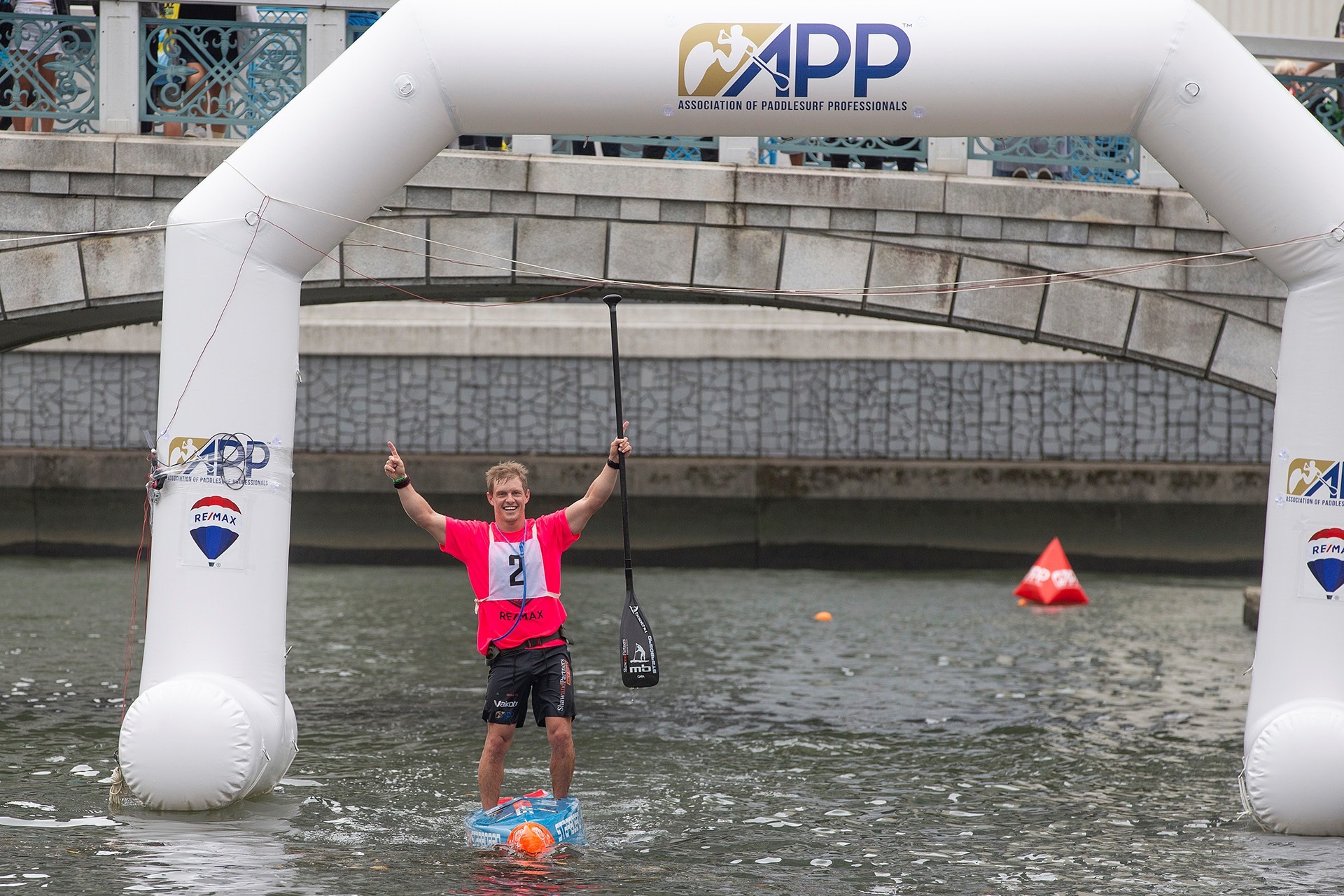 What an insane few weeks it’s been. I set out to have a successful month and what a month it was. Racing in NY, Scharbeutz, Quiberon & Japan in three short weeks has been such an amazing experience. Most recently I finished with a win in the overall title at the APP SUP Open in Osaka Japan. I’ve also placed 11th at the ICF ocean ski world championships in the past two weeks. And since I haven’t spoken to you about that I’ll start with that first.

After I finished racing in Scharbeutz a couple of weeks ago I flew on the Monday to Nantes on the way to Quiberon in France. This is where the ICF World Ocean Ski Championships would be held eventually on the Wednesday of that week. Honesty coming into the event I was pretty exhausted. I’d already spend some 45 hours on a plane in the previous week, been on 3 continents and raced in two major races. It was a total whirlwind.

I was lucky to speak with a few of my French friends over beers in Scharbeutz about flying to the Surfski world champs the next week. It would happen to have it that Titouan, Boris and Amadene would also be heading that way. So I booked my tickets and hitched a ride. Nothing is ever smooth when flying with craft and equipment, so on arrival to the airport i had troubles at the check in desk to get my paddles on. My paddles never arrived and are still actually in France.

That said, I arrived tired but ready to race. I think that’s something you learn when you are on the road, you just get on with it. You learn that you are never going to be 100% at any event and you just work with the circumstances you are in. You just do your best and you don’t give up, which is the approach I take in all aspects of my life. I was lucky to crash with the Hill fam, with Cory, Llani and I sharing a cottage for a few nights during the event. Cory and I used to travel a lot together when we first started ocean racing back in 2010 so it was nice to be able to do that again with his young family.

It was a hectic few days in Quiberon with the race to be held on the first day of the three day waiting period which only gave me one day to get my head around there whole experience. I had to find my ski, get registered, get my feel back on a quick paddle and try and recover from the previous racing schedule, which was never going to be totally possible.

Before I knee it I was on the start line with so many of the best surf ski paddlers in the world with absolutely no idea how I would compare. The conditions were difficult with a 10knot side/tail/side wind making it impossible to sit wash but also impossible to rest. It was foggy, with maybe 5km of vision and it was a hectic pace from the get go. I had a decent start being in the top few off the beach and into the 3rd kilometre. However after that the best guys like the Rice Brothers, Hill, McGregor, etc all paddled off into the distance. I battled most the race with Jasper Mocke, Gordon Harbrecht, Josh Fenn and Sam Norton. I wasn’t quite up to the pace of the best guys but I dug in and gave it my best on the day finishing with a top 10 in the senior men and 11th overall. I got a little second wind toward the final 3km of the race and started pulling a few in but it was too little to late. I was pumped to finish in that caliber of athletes, with limited time on the ski and a hectic schedule. I really hope to put in some good training heading into the Shaw & Partners Race week in Perth where I get to test myself again against the best in the world.

I finished up racing in Quiberon, caught up with so many friendly familiar faces and then headed home the day after the race. It was ideal to go home for 5 days and reset before heading over to Japan with Kristi.

I must say I was slightly disappointed after competing in New York. To finish off the podium in the overall was tough to take considering the amount of work I had put into competing well there. My racing was strong but I really didn’t feel like I got the results I deserved for the work I put in. But I know that happens and racing is not always going to go how I plan it. However I was very happy with how I raced and how I felt during the races!

I wanted to redeem myself coming into Japan as I felt like I had a lot to prove. The New York style of sprints definitely suits me better as it a beach start and with years of Surf Life Saving behind me I tend to do better. The style of sprinting in Japan however would be completely different with a flat water, tight, short, technical style of sprinting that would really test me. In the few days at home before coming to Osaka I had focused on starts and turns as I was honestly too exhausted to do any proper work. This is something I’ve really learnt over the years of racing, that it’s sometimes better to rest then train when you are feeling tired.

We flew into Japan on the Thursday and Nakagama San from Starboard Japan was their to greet us. We are very well looked after by all the team there and we are always made to feel special. I got a paddle in on Friday morning, a bit of rest and sightseeing before a night paddle in Dotonbori which was really special.

Saturday came around quickly with Kristi and I sleeping in until 11am, lucky the race wasn’t in the morning. We made our way to the race site an hour before, where I got acclimatised with the course. My first heat I made a few mistakes but still managed to make it through. The right technical course really was testing my skills and it was extremely bumpy in that small section of the river due to wash from the paddlers, the boats & the tide.

I was then knocked out in a tight finish in the Quater final with Enzo Bennett just beating me by half a second to the line. I thought I had a good paddle but a couple of slight bobbles on the turn maybe cost me. But at the end of the day I did my best and I still have so much to improve. I’ve never been a sprinter in all the sports I have competed in so it’s always hard for me to grab a good result in the sprints. Another 9th place isn’t an ideal scenario for me for the overall world title but I’ve got two months to see what I can improve leading into Paris.

On Sunday morning was the distance with a race around Nakanoshima island. Getting on the start line I felt really tired and inevitably had an average start. I didn’t anticipate there being so much chop and it really threw me off my rhythm. I was well off the pace in the first lap but stayed composed. I gradually felt better as the race went on but my race plan had to change as initially I went into the race thinking it would be flat with a sprint finish at the end. Although this thinking would be entirely wrong with a lot of boats on the course it was more like a downwind with massive amounts of rebound off the wall.

I made my move on the second short lap after hearing a splash at one of the turns and I was able to get a length and then gradually extend from their. However I was never able to take my foot off the gas with Arthur, Lincoln, Daniel and Titouan hunting me down the whole race.

The course really flattened on the second half of the race allowing me to focus on counting my strokes and keeping my power down. It was such an awesome feeling to cross the line first as I really wanted that one. Your past losses are always stepping stones to your next victories and it was so apparent for me on Sunday.

After crossing kristi had told me I’d won overall however Casper had an awesome final stage of his race passing 4 competitors which put us on a tie. Not knowing who won on the count back it was a nervous hour or so until they gave us the verdict. This time it would go in my favour with the distance counting as the tie breaker in Osaka (it switches between sprint and distance each event). I was pretty stoked to take the overall especially after finishing off the podium in NY and finishing with a 9th in the sprints. It’s amazing how the points work out as everyone is so evenly close in all the competitions these days!

We then spent a few days sightseeing around Osaka and what a city it is. We went to Universal Studios Japan, Osaka Castle and we spent a lot of our time in our favourite spot Dontonbori.

I want to thank the APP for giving us these amazing locations to showcase our talents. Also to the Japanese supporters of SUP who lined the shore when we were racing, Thankyou. To Starboard Japan for looking after us, thanks! To everyone who comments on posts and shows support, thank you so much! To my major Sponsors Starboard and Shaw and Partners, thanks I couldn’t do it without you!

My next focus is the Australian SUP titles in Philip Island, Victoria followed by the ICF World SUP championships in Qunidao China.

Thanks for reading this far and let me know in the comments on Facebook what you would like to hear more about from me. Whether that is racing, tips or just general stuff.